About L'Heure Bleue At Home

Put A Horse On It

Did you know that 2014 is the Year of the Horse?  I picked up a couple pairs of vintage onyx horse head bookends recently and am in love. I had been keeping an eye out for them for ages but whenever I found them, they were usually chipped or there was just a sad, lonely single.  I think I have to stop at 2 pairs because a third makes (another) collection! 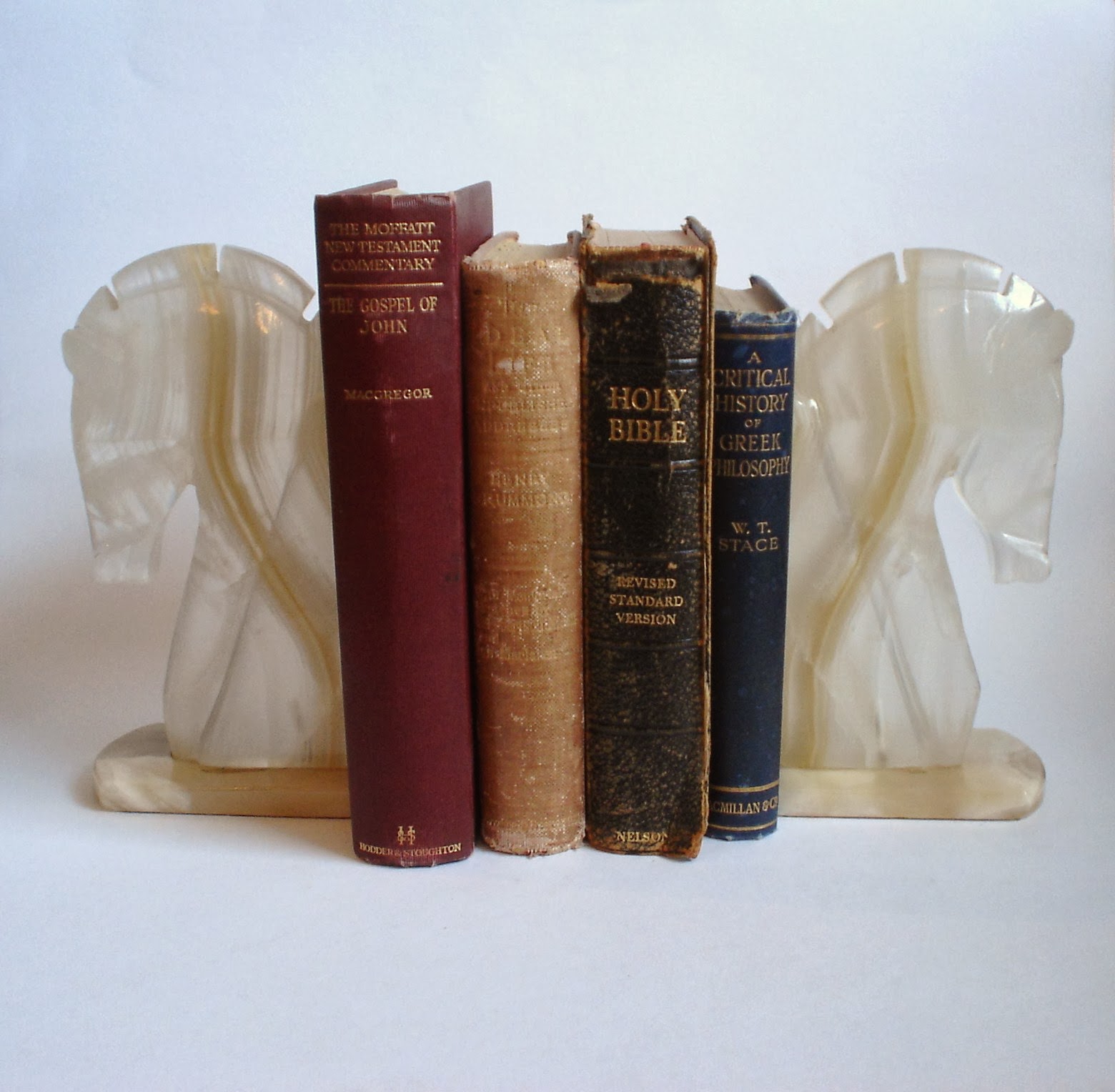 I love the translucent striations in the stone and how each piece is unique. The second pair has striations on the horizontal instead of vertical with dark tan accents. 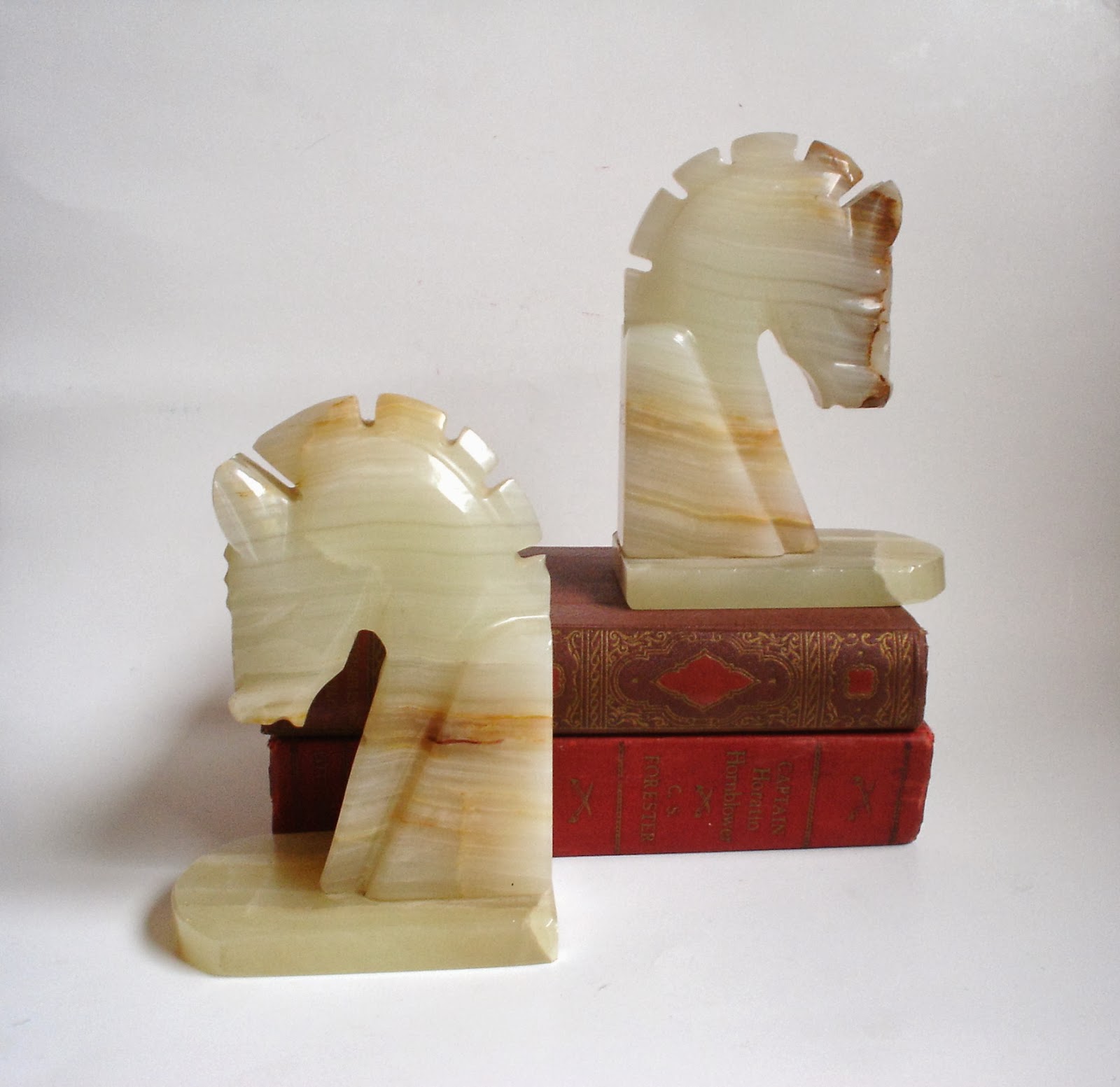 The only problem with bookends is that, when they are fulfilling their destiny as bookends, you can't really see them in their full glory. 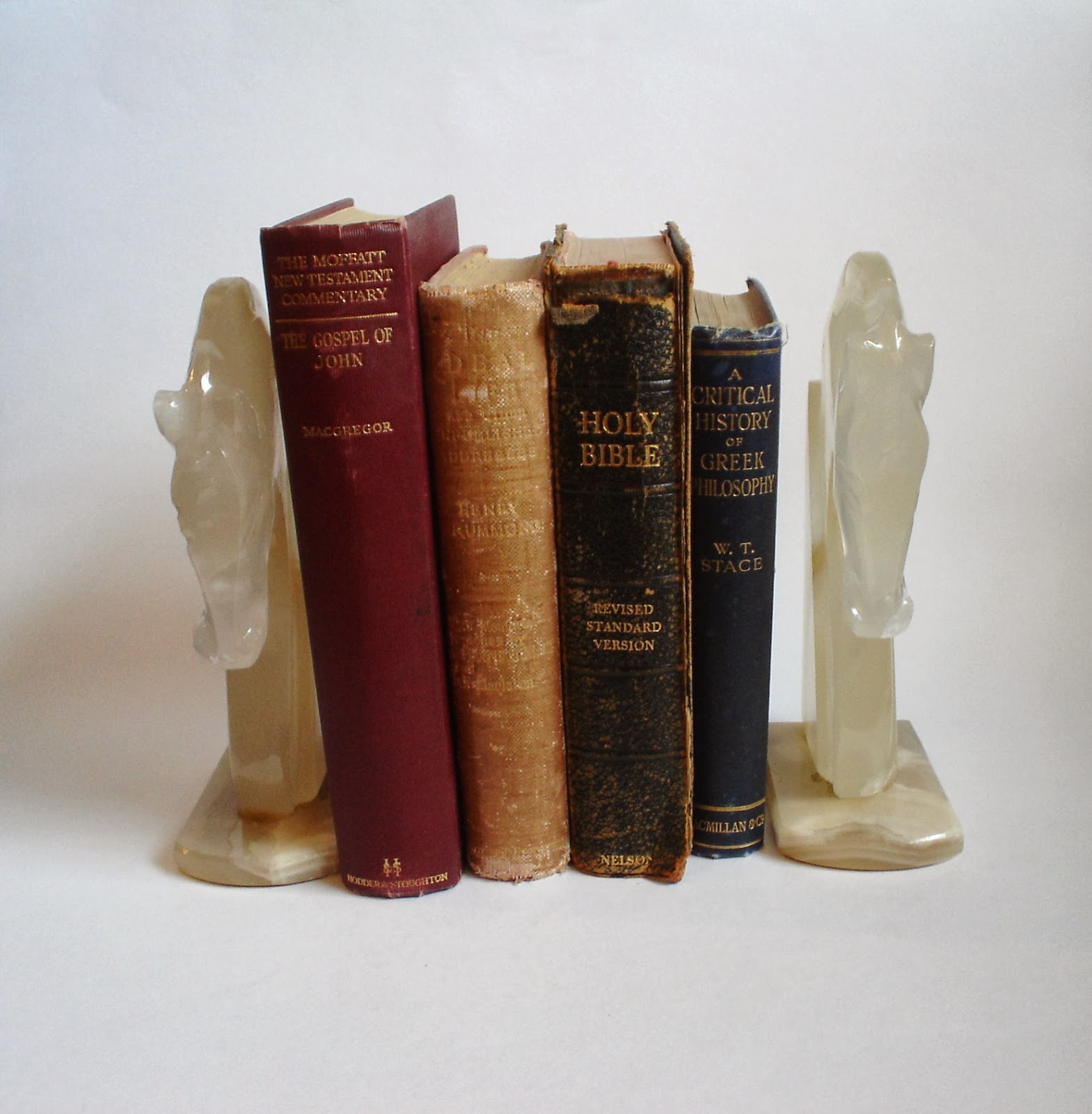 You see?  All you see is the front of their, albeit handsome, heads.  Do you have bookends on your bookshelves or in your decor?  How do you arrange them?  I was pondering this dilemma (I know there are bigger, more important issues in the world but it is a dilemma) when I came across 47 Park Avenue.  OMG! The extreme fabulousness!


I am entranced with the hits of pink. Bold without being sickly sweet.  Do you notice the horse heads on the mantel?  I love the depth and layers on the mantelscape.   Lining things in.a.row. is a trap that I fall into over and over again.  I am really trying these days to be a bit more brave and daring with my decor. 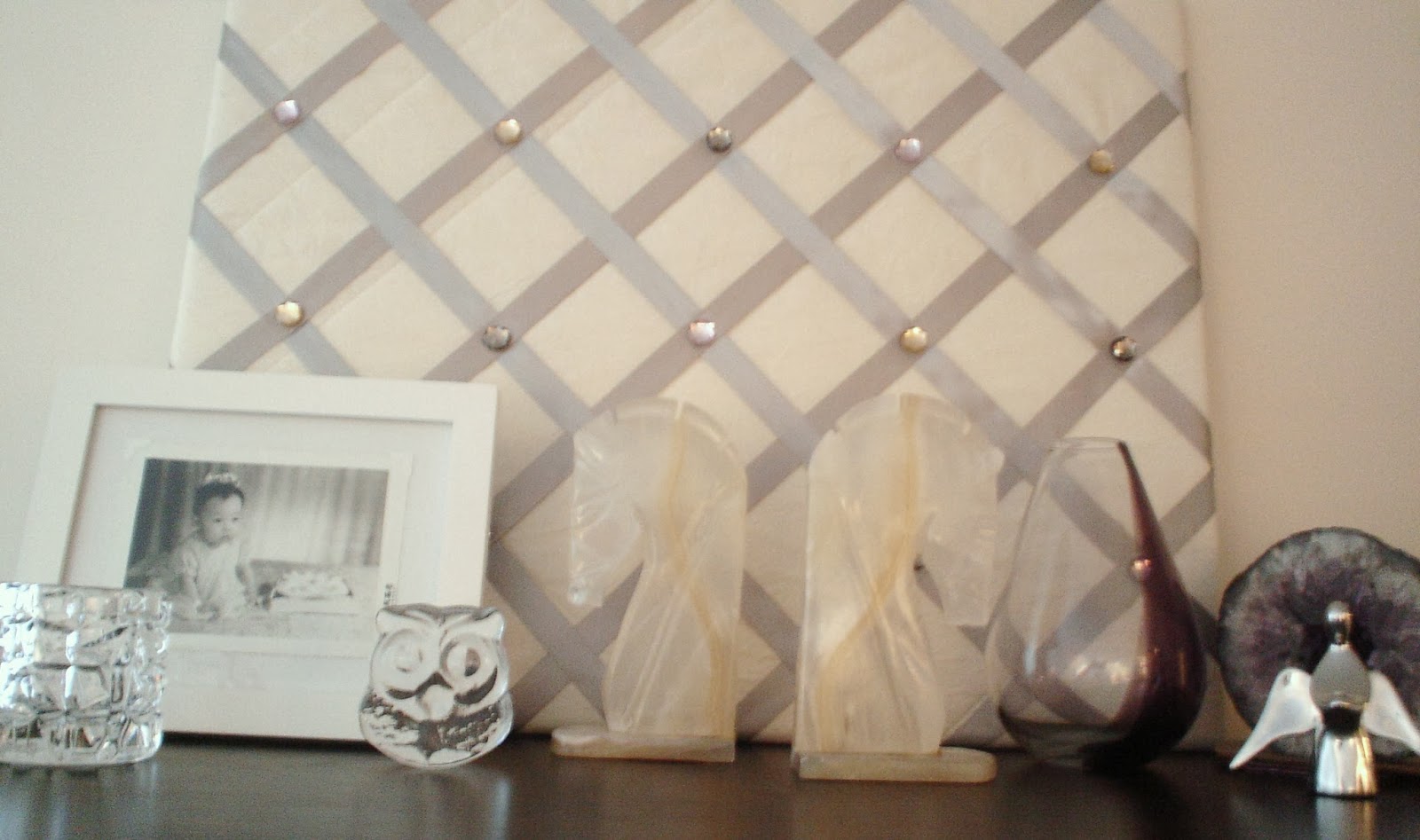 Not as outrageously fabulous as 47 Park Avenue, admittedly, but at least now I can enjoy the horse heads more fully.  I have quite a few thrifted vintage knick knacks on that tallboy dresser including a Royal Krona of Sweden owl and a modernist Hoselton angel that I thrifted recently.  The gigantic round eyes of the owl make me laugh and I like to imagine that the angel is watching over me.  Coincidentally, Pantone announced the colour of the year as Radiant Orchid.  So quite by chance, I've managed to cover the bases on two trends this year!  Are you planning on incorporating any purple in your decor this year!  Or do you stay away from trends?

This week I'm linking up with A Stroll Thru Life, Remnant PDX, Sir Thrift A Lot, A Living Space, and The Thrifty Groove.

Happy New Year!  Are your Christmas decorations still up?  Sadly, I have to admit that many of mine are still on display.  I don't think that I can take all of the blame though as I live with an overgrown man child who prefers that they stay up until Valentine's Day.  I think that, last year, by the time he consented to get rid of the Christmas tree (and only because I pointed out that it had become a fire hazard), it was so dry that branches and pine needles were snapping off at the merest touch.  I find that decorating after the holidays is a bit tricky.  Everything seems so boring and blah after the glamour of holiday decor.  It's too early for Spring themes when we are being lashed by snowstorms galore yet Winter themes feel tired and redundant.  With a nod to Winter, I have a huge crystal bowl filled with pinecones and dried citrus fruit set out on the dining table.  I thrifted the bowl just before Christmas. 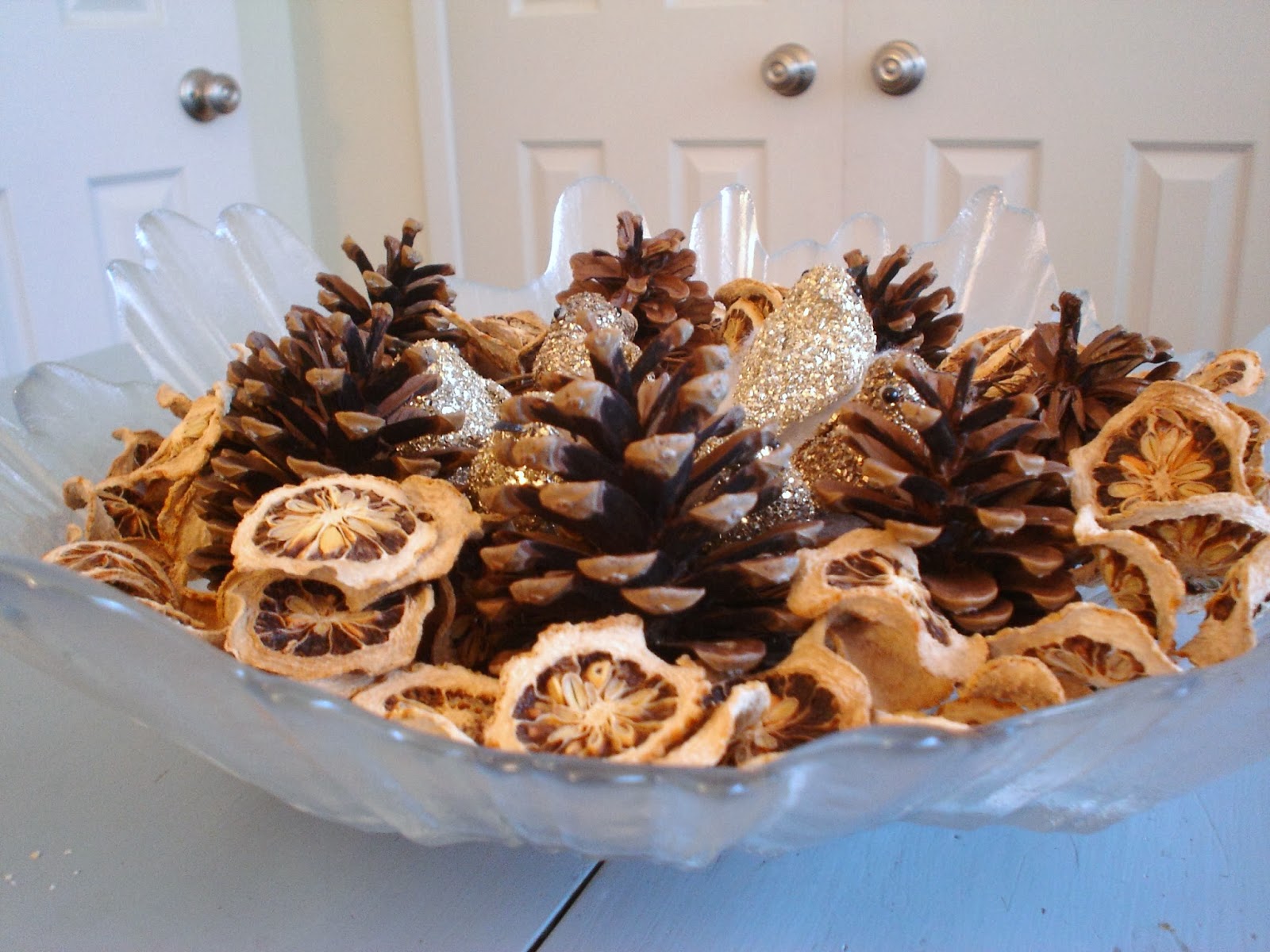 I think it might be by Lasisepat as it looks really similar to their cactus vase.  It doesn't look like a cactus to me though.  I think the wavy rim looks more like icicles or icy stalagmites and reminds me of the wintry freeze outside.  What do you think?  I tucked glass glitter birds in amongst the pinecones as I wanted a bit of Wintry sparkle.  Do you see them peeking out? 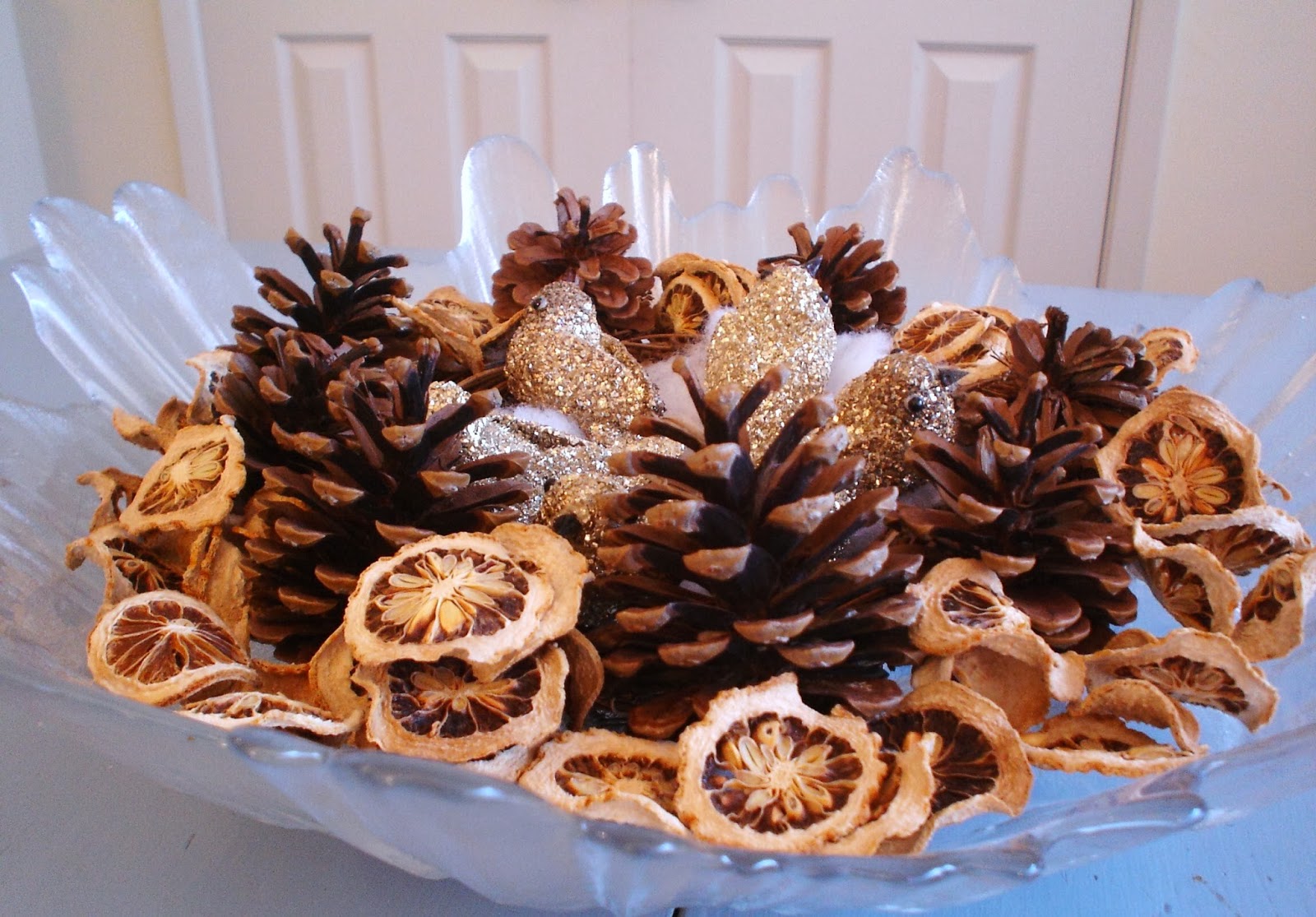 One of the things I love about the New Year is cracking open a new daily planner or diary.  I know that the thing to do nowadays is to record appointments on a smartphone or Ipad but I'm adamantly oldfashioned in this regard.  I prefer jotting things down in a daily planner.  I noticed that a lot of things were selling out way ahead of Christmas and Boxing Day.  I think, because we had a severe ice storm and there are still a lot of people without electricity, there was a bit of a siege mentality going on.  Usually I am able to nab a Moleskine planner on Boxing Day but this time I got it before Christmas as it was the last one at my local bookstore. 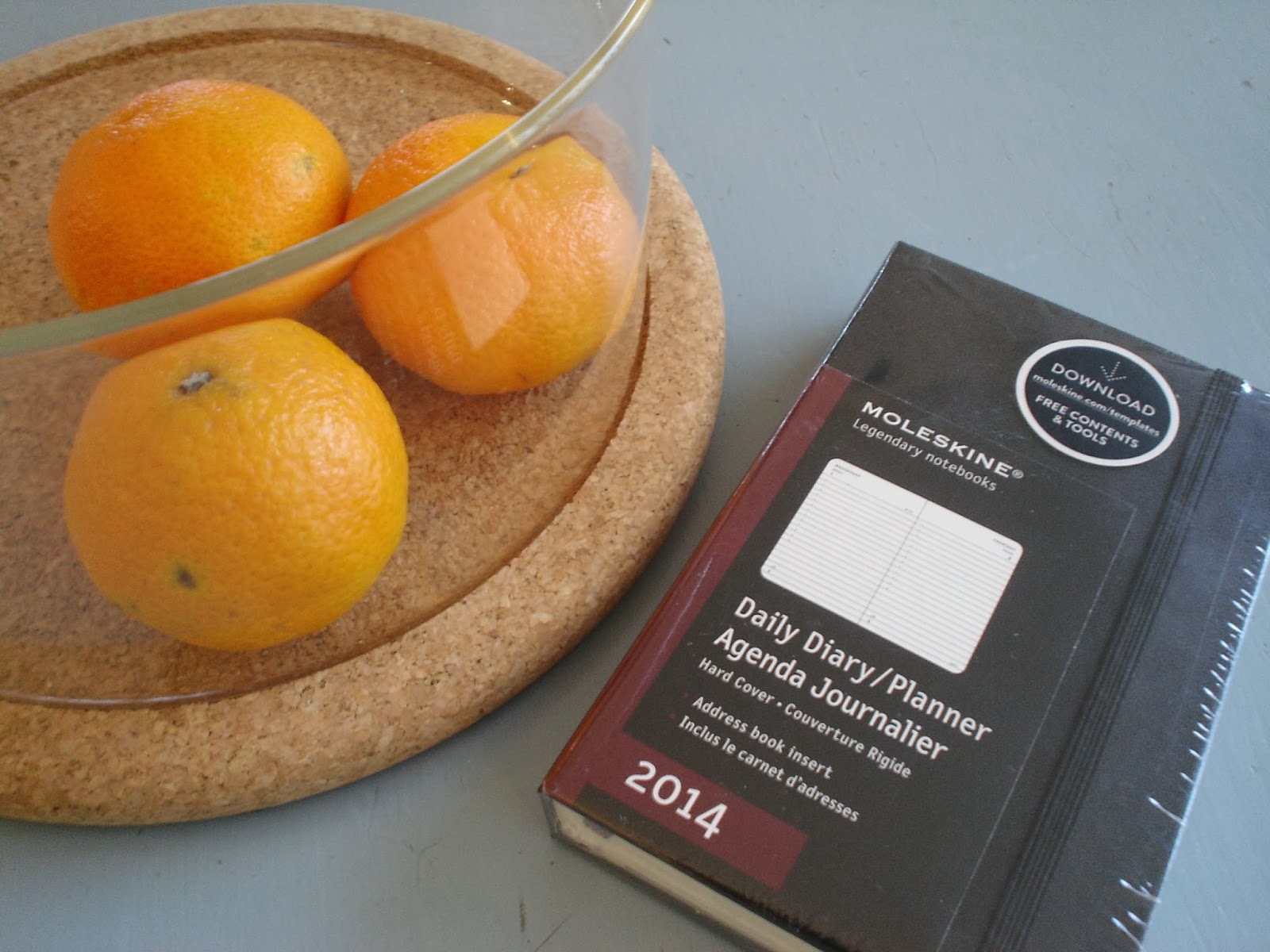 Only a few clementines left!  We picked up the last box of clementines at the local grocery store on Christmas Eve.  I couldn't believe that it was the last box as usually there is a giant mountain of them at this time of year.  I put the clementines in a vintage Boda Nova bowl.  Love the clean simple lines, wafer thin walls and the accompanying cork trivet.
Having fresh flowers in the house is an expensive luxury especially at this time of year.  So I compromised by having a few leafy cuttings snipped from the hedges outside.  I popped them into a vintage Iittala Savoy vase thrifted just before Christmas. 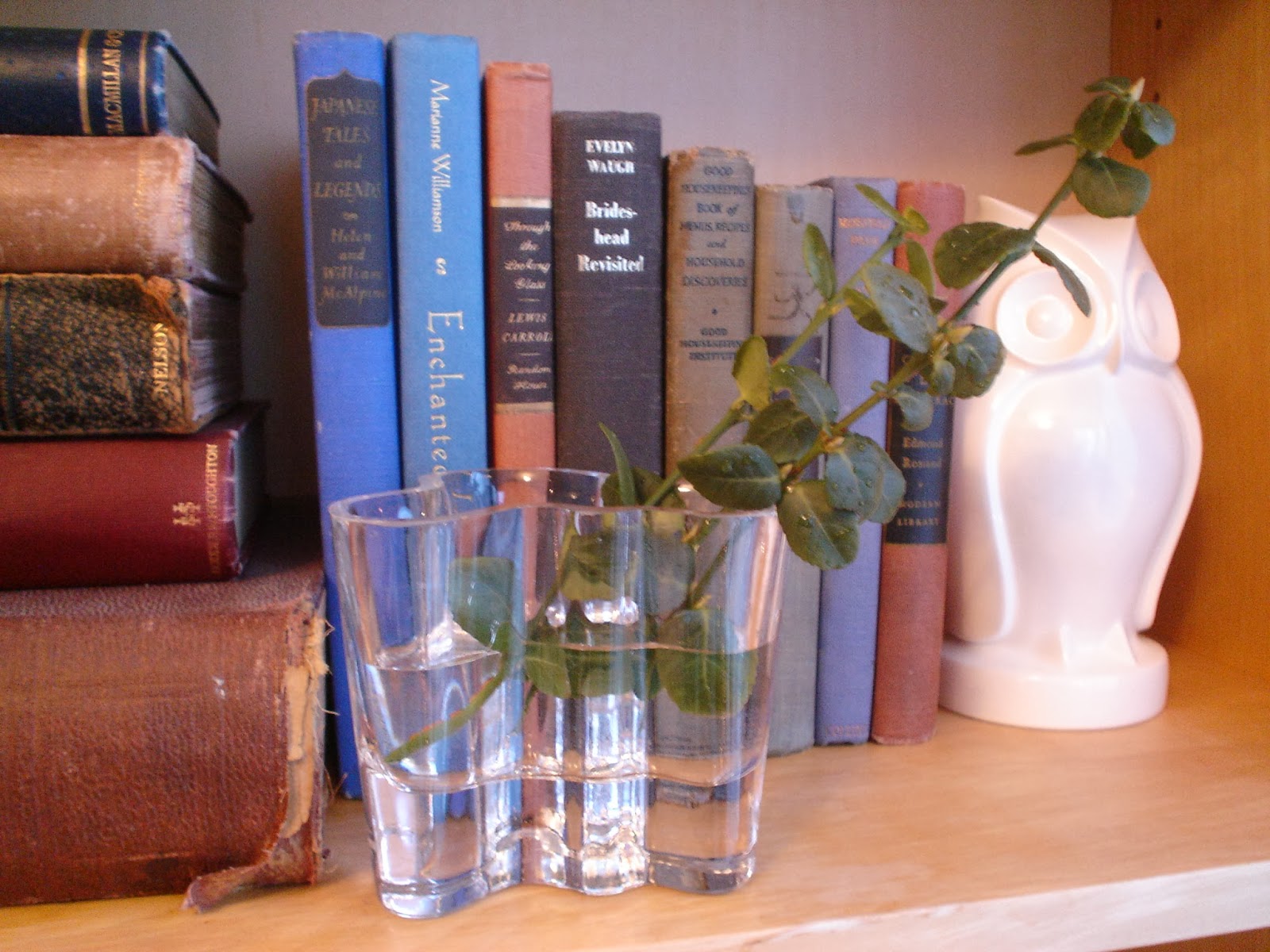 I had been on the lookout for this vase for a while as I loved the organic shape of it.  I think it is the smallest size available which suits me fine as a few sprigs looks perfect in it.  No need to worry about trying to arrange a giant mass of flowers. 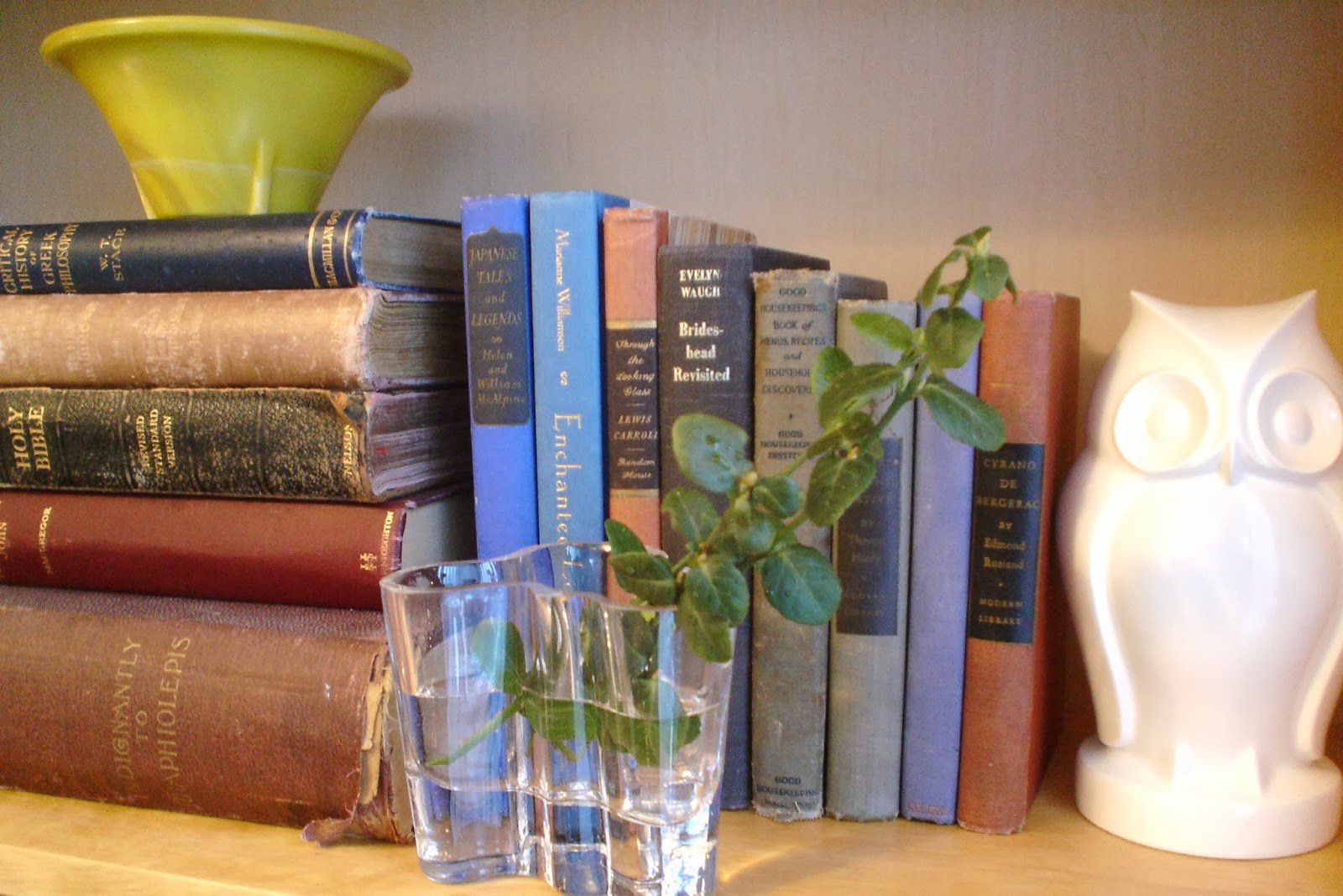 I love juxtaposing different eras and styles.  I have tried to keep to one style or era but have found that it doesn't work for me.  I prefer the layered look.  It amuses me to place the clean lines of a Scandinavian vase against a pile of weathered old books.  How do you approach decorating?  Do you have a specific style that you adhere to?  Let me know how your Winter decorating, post holidays, is going!

I'm linking up with A Stroll Thru Life, A Living Space, The Thrifty Groove.